Dabbawalas of Mumbai: The Original Food Delivery Network in India 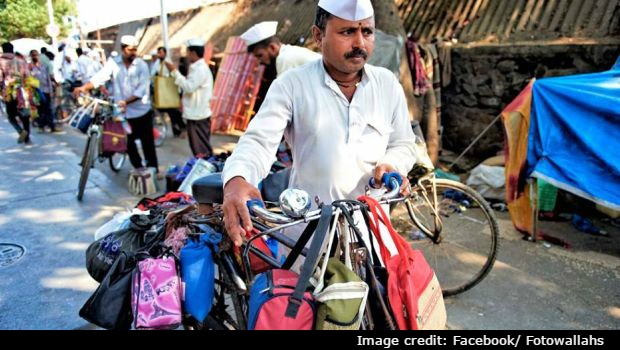 Bhelpuri. Marine Drive. The Taj Mahal Palace Hotel. Bombay duck or bombil. Sanjay Gandhi National Park. Dabbawalas. What do all these have in common? They are all, to my mind, at least, iconic symbols of Mumbai. Mumbai would not be Mumbai without the crunch and sparkle of bhelpuri on Juhu beach; without the rain-lashed Marine Drive, slick with water on a monsoon day. Certainly, Mumbai wouldn't be Mumbai without its wave of dabbawalas, unleashed onto the city every morning, transporting their precious cargo from home to office and back.

It's been perhaps a decade, or two, since Mumbai has woken up to the brilliance of the dabbawalas, but they've been around from 1890, a time when Mumbai did not enjoy the surge of cafes and restaurants it has today. Their charming website called Mumbai Dabbawala informs us that the first dabbawalas hailed from the Warkari sect of rural Maharashtra. Their first customers were Parsi women, and according to the site, "it all started...when a Parsi banker wanted to have home cooked food regularly in office and gave this responsibility to the first ever dabbawala."

The Rise of Dabbawalas

It was the canny mind of Mahadeo Havaji Bachche who perceived a strong business opportunity in this, and started a proper lunch delivery system with about 100 dabbawalas, many of whom came from the Maval district of Maharashtra. According to Shobha Bondre, in her lively Marathi book, Mumbaicha Annadata (translated into English), the men from Maval used to be "brave soldiers of the warrior king, Shivaji."

Word then spread to other Parsi ladies, who called them 'bhonawallas' (Bhonu being the Parsi word for meal). The bhonawallas used to live mostly in Girgaum, which was at the time, teeming with Parsis.

Soon enough though, demand rose and rose. The British developed an excellent railway network that helped in vastly increasing the area that they could cover. Mumbai grew in size and industry and population, and it took the dabbawalas with it. Bondre writes that, "Handcarts and bicycles start being used, and instead of the traditional round basket, long rectangular crates were introduced, which could transport 30 to 35 tiffin boxes at a time." In the 1930s and 40s, many dabbawalas shared tiny, cramped quarters in Khetwadi, Grant Road and Dadar. Many even slept on the street. The wages at the time were about INR 8! Bondre writes, "One room was shared by 15 to 20 dabbawalas. Each person had very meagre possessions: a bedding roll and an extra pair of clothes in a small metal trunk, that is all!"

Much has changed since those days, but one thing has remained constant - the exceedingly efficient calibration of the dabbawala's network. Scurrying across the city from Virar to Nariman Point, from Kalyan to VT, the dabbawalas today manage about 2,50,000 dabbas between them! From 100 dabbawalas in the 1890s, there are now five thousand, fanning across the city in perfect precision. The dabbawalla's numerical coding system is extraordinary, and ensures the lowest possible margin of error. The whole thing evolved because many of the dabbawalas were illiterate, and sadly some still are. But they don't require reading skills to understand the coding system, which is why the system is so effective.

The Process of Delivering Food

The life of a dabbawala is not easy. Their day begins at 9am, when they cycle to clients' houses to pick up lunch boxes, all of which is done by 10:30 or so. Cycling valiantly, he reaches the nearest railway station where the dabbas are all perfectly organised for the next sweep of dabbawalas to take the tiffins to offices. They all climb into the luggage compartment of the train, each alighting at their assigned stations. Every so often, a dabbawala will hand over a tiffin to a colleague, because he will have mentally calculated that it would reach faster by this alternative route.

Anyhow, once the dabbas have been delivered to their offices, the entire procedure is repeated backwards. Dabbawalas now scamper across the city to collect the empty boxes, and then deliver them back home. It is a nine-hour work cycle of extremely demanding labour, ensuring that the cook and the consumer get their tiffins in time. Perhaps it is this punishing physical labour that holds back women from joining the dabbawalas - it remains a male bastion.

The dabbawalas have received no end of plaudits from Indian and international organisations. Various publications have carried glowing stories about them. Richard Branson has hobnobbed with them, as has Prince Charles, who even invited them for his wedding. (Two in fact, did go!) FedEx too, has popped by to study their logistics. The dabbawalas have even made it to Bollywood, in the film The Lunchbox. In 2010, the Harvard Business Review assigned the dabbawala system a six sigma rating, in spite of the fact that they use no technology whatsoever (although some have questioned the accuracy of the rating). This means that out of 80 million annual deliveries, dabbawalas only make about 300 misplaced deliveries! According to the Review, this was because they all shared the same language, religion and culture; excellent organisation; efficient process; and worker empowerment (each dabbawala finds his own customers and sets his own price).

Today though, the dabbawala grapples with more than the weather and traffic conditions. Sophisticated lunch deliveries are coming up in the city, offering salmon tartare and lamb ragu to office workers. Delivery systems such as Meals on Wheels are here, using technology such as smart-phones and apps, to deliver their wares. Organisations such as Scootsy deliver food around the city. Office people go out for lunch, more often. Women have entered the workforce, and no longer have time to prepare fresh lunches every day. But still, the dabbawalas persevere. And thank God. A Mumbai without its dabbawalas would be unthinkable.