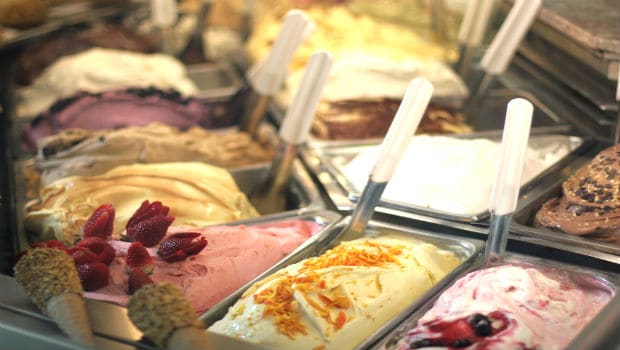 Gelato is a creamy, Italian dessert which is loaded with flavour

This frozen dessert oozes with flavour, which is layered densely throughout. Its smooth and melt-in-the-mouth texture is drool-worthy. Gelato is undoubtedly a refreshing way to beat the heat with a range of flavours such as mango, chocolate, tiramisu, pistachio, blueberry, lemon or raspberry, among others. Every single bite leaves you craving for more, and it's said that its calorific value is around 70% less than the traditional ice cream.

Gelato comes from the Italian word 'gelatus', meaning 'frozen'. It is made from a base of milk, cream and sugar. The Italian summer treat is often assumed to be the equivalent of American industrialised ice cream. In fact, many people are hardly able to tell the difference between the two. But before we go on to that, let's have a look at the origin of gelato, where it came from and how it spread across the globe.

Gelato's origins are highly questionable, as many people claim to be its original creator. This is exactly what happens with any dish or recipe that gains immense popularity in very little time. The history of gelato dates back to the Italian Renaissance during the 16th century, according to most stories. Sometime in the late 15th century, a famous artist and architect of that period, Bernardo Buontalenti, was commissioned to prepare a feast for the visiting King of Spain. Bernardo came up with the idea of a creamy, frozen dessert called gelato, much to the delight of the court of the king Caterina De Medici. Thus, Bernardo Buontalenti is presumably the inventor of gelato.

However, the credit of taking gelato to new places goes to a Sicilian restaurateur, Francesco Procopio Dei Coltelli. He was the one to sell gelato to the French public through his café in Paris called Café Procope. The café soon became popular among European citizens for its novelty items, one of the most talked about of which was the gelato. Gelato was served by Dei Coltelli as a refined, creamy dessert in small glasses that resembled egg cups.

Gelato made its way to America much later in 1770, when an Italian emigrant named Giovanni Basiolo brought the recipe to the city of New York. Meanwhile in Italy, the beautiful craft of gelato making kept being passed on through generations, getting better with time. Post 20th century, an increasing number of Italians migrated to the remaining parts of Europe, taking along with them the knowledge and expertise of making the perfect gelato. And thereon it spread all across.

Gelato made its way to America much later in 1770; Image credit: Istock

When Giovanni Basiolo migrated from Italy to America in the later half of the 18th century, there were majorly two kinds of gelato in production-

The Milk-Based Gelato: It comprised milk, cream, sugar, eggs and natural flavours. This was the original gelato recipe, which was then modified to add new flavours. It originated from a place in Northern Italy called Dolomite. Here, gelato making and storage was a major source of income for the people, who often made decent amounts of money during the summer tourist season. This kind of gelato is being produced even now, with traditional Italian flavours like chocolate, pistachio and hazelnut being all-time favourites.

The Water-Based Gelato: It was lower in fat and higher in sugar content than the original gelato, and better known as 'Sorbet' in English, or 'Sorbetto'. This kind of gelato was widely produced in the South of Italy, where the artisans would travel to neighbouring countries to showcase this tasty concoction. The techniques of producing this gelato, however, were very similar to that of the North. The water-based Gelato or 'Sorbetto' is available in shops in fruity flavours like lemon, melon, and peach.

(Also read: How to Make Ice Cream at Home: An Easy, Foolproof Recipe)

The water-based gelato is lower in fat and higher in sugar content than the original gelato; Image credit: Istock

This is something that many people often ponder over, what is the actual difference between gelato and ice cream? Or is gelato just an Italian version of its American, industry-produced counterpart? How does gelato seem so much creamier and softer? How are the flavours so dense vis-a-vis the American ice cream?

It can be explained by three simple factors- the amount of air, the fat content and the serving temperature. The technique of making gelato involves a similar process to that of ice cream, however, it is churned at a much lower speed. This ensures that lesser amount of air gets whipped into the gelato. American-style ice creams are generally churned very fast in order to make the cream fluffy and introduce a large amount of air into it.

As for the fat content, your neighbourhood gelato parlour's claims of gelato being 70% less fattening than traditional ice cream may actually prove to be true. The science behind gelato shows that it utilises a milk base, as compared to the cream-based American ice cream. Also, another reason why gelatos come out creamier and softer is that they are served at a much higher temperature of 15 degrees, instead of being frozen like their American counterparts.

What is the actual difference between gelato and ice cream? Image credit: Istock

Is Gelato a Dying Trend?

The great Italian pastime of eating gelato is far from dying, as gelato stores are opening up in not just America, but various other parts of the world. Traditional Italian gelato parlours, also known as Gelaterias, are exploring new ingredients and developing innovative flavours. People are now appreciating the gelato's low-fat properties, how it is so densely flavoured and the natural ingredients that are used in making it.

Apart from the popular gelato, Italians are also masterful at creating new dishes using gelato. One such example is a semi-liquid dessert named Sgroppino, which utilises gelato along with vodka and a few other ingredients to make a brand new dessert altogether.

Check out the recipe for Sgroppino here.