How to Make Rasmalai: A Sinful Dessert from East India 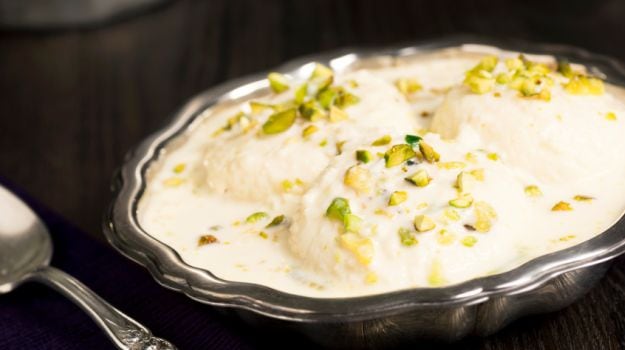 I have to confess that for the longest time I didn’t know the difference between Rasmalai and Rosogollar Payesh, till I actually ate the former, which literally translates to ‘juice’ from ‘ras’, and ‘cream’ from ‘malai’.

The first time I had it at a sweet shop I found the malai too runny and the semi-flattened Rasgulla unappealing. However, the strands of saffron, the cardamom flavouring, and a few slivered pistachios in the dessert were quite wonderful. When we tried to replicate the dessert at home, we rarely added anything extra, but the thick creamy texture, with perfectly round Rasgullas immersed in the kheer was hard to compete with. The only flavouring we considered was a bit of nolen gur in the thickened milk, or some rose water in the sugar syrup in which the Rasgullas are soaked.

A friend who had his first Rasmalai sitting in the US says he had a rather modernised version of it where ricotta cheese was topped with sweet thickened milk, and then baked. “It wasn’t really Rasmalai, nevertheless a tasty version of it,” he says. Incidentally, after various tastings of the dessert, he says that the Rasamalai found in the northern part of India is almost like Rabdi, whereas the version found in Kolkata is much lighter.

The Making of Rasmalai

There is no hard evidence as to where the Rasamalai comes from, even though KC Das is claimed to have been the inventor of this dessert. But given that the original Rasgulla comes from Odisha, I wouldn’t be surprised to learn that the Rasamalai too has its roots there.

Making a Rasamalai isn’t very easy, unless you’re sourcing the Rasgulla from the market. You have to first begin by curdling milk (or even cream of milk) with some lemon to make chhena, and then straining it through a piece of clean muslin to remove excess water. Once all the water has drained, knead the chenna till it’s a smooth paste. Add some all-purpose flour (some even add sooji/semolina to it) and knead some more.

In the meantime, bring water to boil. The dough needs to be shaped by hand to resemble slightly flattened patties. Once the water is boiled, drop the patties into the boiling water, and put a lid on the pot. It takes about 10-15 minutes for them to cook. When all the patties are puffed, you’ll know it’s ready. Remove the patties, and squeeze the excess water out. Then transfer them into a thin sugar syrup, which you can flavour with rose water.

Now comes the second part – making the Rabdi. For this you need milk, sugar, saffron strands, green cardamom powder, and chopped or slivered pistachio. The trick behind making a perfect Rabdi is to keep a hawk eye on the milk. It has to be reduced in a thick-bottomed pan, and once it starts to boil, reduce the heat, and add the saffron. You have to keep stirring so the milk doesn’t stick to the bottom, and let it cook till it’s practically half in quantity. This whole process takes about 15 to 20 minutes. Once done add sugar and cardamom powder.

Once the sugar dissolves into the Rabdi, add the patties and the chopped pistachios. Let it cook for a few more minutes to make sure the patties have soaked in some of the Rabdi. Remove from the pan and let it cool for some time. You can either have it in room temperature, or slightly chilled.

The thickness of the Rabdi depends entirely on you. Some even make a rather runny version of it, which is equally tasty.  But just make sure it doesn’t get lumpy, or burnt, which is why regular stirring is a must.

I have had interesting variations of the Rasmalai, where tiny chhena dumplings are used instead of the much larger patties. It tastes just the same, only looks cuter perhaps. And then there are those who use a short cut, resorting to condensed milk instead of going through the process of reducing the milk. No fun there for sure.

I also came across a recipe where the Rabdi is first cooled, and then flavoured with freshly made mango puree. This can definitely add an interesting twist to the whole dessert. And in fact, you can do away with adding sugar to the milk, and rely on the fruit’s natural sugars to make the Rabdi sweet. At least that way one can feel less guilty, isn’t it?

Here’s a recipe from Chef Marut Sikka, click on Rasmalai.