The Story of Spice Mixes: What Makes Some Dishes So Hard to Resist 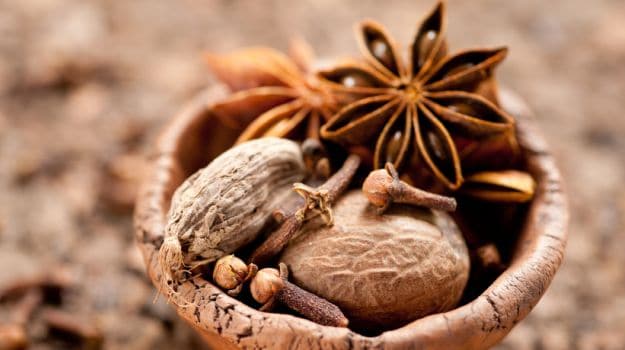 Each time I make the spice mix for Bharwan Bhindi, stuffed okra, at one of my Kayastha food promotions, I get the same reaction: Trainee chefs, assigned by hotels to help me with the prep, seemingly look on in bewilderment and dare I say awe, as I blend together fennel and amchoor and sundry other common spices, tasting to see whether the proportions have mixed well enough to replicate the taste of my home. Like all home cooks, no one in my family cooks using precise measurements, including me. The proportions of spices that go into the “mix” are driven by “andaaz”, on individual discretion and palate. When we seek a balance, it is to try and recreate taste from memory.

For the longest while, I would be amused at the hotel chefs’ perplexity and inability to make the masala in my absence. It is after all no rocket science. Just a handful of spices go into the mix and considering that most people in India cook with andaaz and an instinctive knowledge of balancing flavours, why should it be seen as a semi-mystical task to assemble the masala? Then, gradually, it began to occur to me that it had to do with the memory of taste. All of us have different ones, having grown up with different kinds of foods. And to successfully replicate flavours of a particular tradition, you must have sufficient prior exposure to that tradition. Trainee hotel chefs, obviously, could not therefore be expected to make my ghar ka khana, the food of my home and community, in quite the same way as I do.

And that is also the reason behind the proliferation of different readymade spice mixes all over the country: From the North Indian garam masala to the Maharashtrian goda masalaand bottle masala, and Parsi curry masala to the various sambhar masalas, whose composition varies in different regions (the Karnataka-style for instance is quite different from the Tamil-style and the one made in Kerala).

The Tradition of Spice Mixes

While we may now buy these masalas off the shelves, paying scant heed to the individual spices in their compositions, it is important to remember how the tradition of these spice mixes really started – as individualistic expressions of the art of balancing flavours. Each person and each home had different flavours, and certainly different mix of flavours they favoured. And thus the spice mixes that we take so much for granted also differed slightly, according to the different palates and andaaz of balancing the taste. There were no generic mixes. And there was also no awe associated with many of these. Each home simply had its own recipe.

As cooks and other masala makers started making these spice powders for retail, the reputation of specific brands spread according to how much they were preferred and accepted by their patrons. If the chaatwallahs of old Delhi boast about their secret kala chaat masala with many different types of spices, it is merely because of the large number of patrons who started validating that particular flavour. Some of the best home-made chaatfrom UP is made with nothing more elaborate than roasted cumin, amchoor powder and black rock salt — the most basic of chaat masalas. When bazaar-bought chaat masalas boast 100 ingredients in the spice mixes, it is also to flavour their reputations. A smart case of marketing!

For a very long time, the holy grail of Indian chefs in restaurant kitchens has been to decipher the masala for Galouti Kebab. For someone like me, who grew up in Lucknow, this seemed inexplicable in the beginning. The Shami Kebabs made in my home were quite well-known in the community and relatively simply spiced. Instead of a readymade “potli masala”, we made our own potlis, where whole spices — black and green cardamom, cinnamon, bay leaves, black peppercorns, cumin, nutmeg, mace and cloves — would be tied in a muslin cloth and put into the keema to boil and cook, providing ample aromatics. Galouti Kebab was initially just an improvisation on this basic kebab recipe; where the meat was made more tender using raw papaya as tenderiser.

Cooks in the Awadhi court, because they were feeding the rich and the powerful, started adding more elaborate masalas to the kebabs. Many of these were essentially fragrant ingredients like khus ki jad and paan ki jad. Others were ingredients and herbs used in Ayurveda and Unani medicine, some ostensibly aphrodisiacs, others said to improve vitality, strength, complexion et al. Many of these ingredients were quite exclusive, hard to come by and certainly not available in regular home kitchens. But because the Awadhi banquet cooks were catering to an elite audience, much like today’s foie-gras seekers who sought the expensive and hard-to-come-by “niyamat”, more and more elaborate spice mixes seem to have been concocted, regardless of the fact that you can scarcely taste all the ingredients in these. Some of these spice mixes were reputed to contain over 100 spices. Given the miniscule quantities used for all the different spices and herbs, it is safe to bet that the omission of at least a dozen would make no difference to the final taste of the preparation!

Tunday Kebabi, the Lucknowkebabchi that acquired a mystical reputation for its kebabs, as well as stories around it, became the standard pit-stop for Galouti Kebabs all across. And his spice mix, ostensibly made by the women of the household, became the most mysterious of those equations that hotel chefs and enthusiasts desperately sought—and still do—to solve.

What really is the composition of that mix? To decipher that is still the holy grail of many chefs. It may be as futile an exercise too! Because you don’t really need ingredients like shilajeet and others, used in desi medicines, and many in the grey area as far as their culinary use goes, to make perfectly great Galoutis. It just has to do with your instinct for balancing flavours, your memory of taste and your acquaintance with Awadhi food.

On the other hand, there are some less commonly available spices with strong aromas and flavours that can certainly add to the regional recipes you are cooking. Here’s my pick and what to do with them:

It is similar to allspice (dried berry of the South American pimento) but is really cubeb (cultivated in south-east Asia, sometimes called Java pepper). This one looks like pepper but has a tail attached. Cubeb was used by Arabs and the Arabian Nights mention this as a cure for infertility (in Unani medicine, it is also used to heighten sexual pleasure while in Ayurveda, it was used as a mouthwash). In India, this came through trade with the Chinese, hence the suffix “chini”. This is a strong spice and best used in meat curries and kebabs for a strong aroma.

Promoted
Listen to the latest songs, only on JioSaavn.com
It is a southern spice. A moss-like substance that grows on wet stones, this is used in Tamil cooking to flavour meat curries. It is also an essential ingredient in the goda masala and gives it that strong smell. But by far its most “exotic” use has been in Hyderabadi cooking where it goes into kebabs and biryani mixes.

Or long pepper. It tastes pungent and sweet at the same time. This is one of the oldest ingredients of Indian cooking that have almost disappeared. Chilli, as we all know, came with Colonial trade into the Subcontinent. It was gradually to replace most other spices providing pungency to a dish. Pippali along with pepper were the original spices of India that were used to flavour food before the advent of chillies.