How Yogurt (Curd) Can Help You Keep Cool this Summer 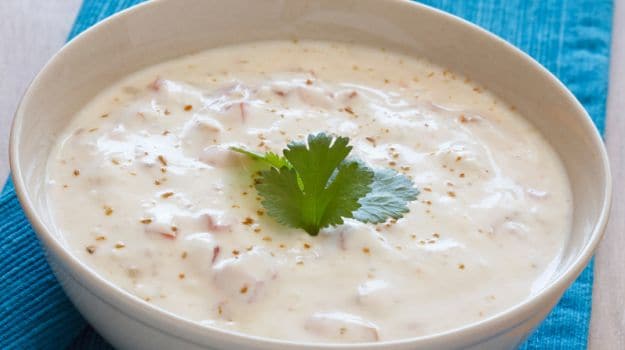 Highlights
"Did you notice that the dahi (Indian curd) in chaat is always sweet," said Manjit Gill, corporate chef of the ITC Hotels group, while we enjoyed some Delhi papdi chaat, aloo tikkiand gol gappe at the unlikely location of a 5-star resort in Manesar, far removed from the crowded lanes of old Delhi. According to Chef Gill,chaats, the popular street food of North India, were allegedly invented about 400 years ago in old Delhi when the Mughal rulers wanted to come up with a dish that helped counter water-borne diseases. The sweetness in dahi is because adding salt to yogurt leads to acidity, explained Gill, and hence salt in dahi is a no no. Today, we go to stores and buy probiotic curd as it is said to be good for digestion. However, Indian cooking traditions always knew that curd was good for health, this is nothing new to us.

I was in Delhi for the weekend recently and it was really (really) hot and dry there. Curd came to the rescue again, as I politely refused the wine and beer offered with meals and went for the lassi instead. Lassi is Punjab's flagship drink, made with curd and water churned together as the base. After hearing Gill out, I asked for the sweet lassi and not a salted one. What I noticed about the lassi at Delhi in places such as the United Coffee House at Connaught Place and the legendary Bukhara, as well as the lassis I have had in farmhouses outside Amritsar and at dhaabas such as Kesar Dhaba, is that they tend to be lighter and frothier and less sweeter than the lassisone gets in Mumbai. And they are a lot more refreshing too.

The Punjabis use curd in cooking and not just in lassi. At times, yogurt is used as the marinade base for tandoori chicken or as the souring agent instead of tomatoes in mutton (goat meat) curries or as a base for the Punjabi kadhi. Hardeep Chadha, co-owner and food in charge of Khane Khas, a Punjabi restaurant in Mumbai's Bandra, says they also make a Dahi Wala Aloo at home. Here, beaten curd is added to cooked potatoes, to make a sauce, before taking the pan off the hob.

This is pretty similar in concept to the Bengali doi maach, where fish is finished with a curd-based gravy. I had a deliciously rich and tangy doi maach on the Bengali New Year at Oh! Calcutta in Khar, Mumbai, though I make a lighter version at home.

Rajeev Neogi of the Bengali restaurant chain Bhojohori Manna conjectures that the doi maachh was inspired by the use of dahi in Awadhi dishes such as the korma. This probably explains why the doi maachh curry is richer than a light machher jhol or Bengali fish curry. It is a part of the sweet loving Ghoti community from West Bengal and hence is also on the sweeter side. Something chef Gill would approve of! Neogi feels that the doi machh entered the Bengali summer wedding menu to balance out the heavy on the belly, red goat meat-based, kosha mangsho that followed.

Tip: Adding curd while the doi maach (or any dish) is being cooked might lead to the yogurt getting split so it is best to add curd at the end of the dish as I have learned from personal experiences.

India is such a diverse country that culinary beliefs change from one part to another. One such example is the use of curd. While doi maach has long been a part of Bengali cuisine, my wife, a Parsi, would never tell her late grandmother that she had eaten it. This is because in the west of India, fish is not meant to be cooked with dairy products. Neither was it in Punjab, till recently. Old unfounded beliefs there held that "adding yogurt to fish could make one an albino," says Chaddha. Modern medicine has refuted that myth of course, and now curd is used in the marinade for fish tikkas even by the Punjabis.

Or perhaps they tasted the Bengali doi maach and got convinced about adding curd to fish!

The issue of using yogurt in cooked dishes in general, and not just to fish, is a tricky one. Awadhi cooking (from Lucknow) uses curd in biryaniand gravies such as the Rezala. Yet, Izzat Hussein, who comes from the Lucknowi royal family and is trying to bring alive Awadhi royal recipes, doesn't use curd as a marinade forkebabs.

I met Hussein at the Rivayaat Festival at the Trident BKC at Mumbai where Hussein had come up with a royal Lucknowi menu. Turns out that he is a Unani doctor and a scholar as well. This Perso-Arabic school of medicine believes that curd should not be subjected to heat before consumption and hence the good doctor looks for options other than yogurt for his kebab marinades.

Talking of adding salt to curd, which is where our story started off, the South Indian comfort dish of Thayir Sadam(curd rice) has salt added to it. As I said earlier, different communities from different parts of India have varying beliefs and thus different approaches to using curd. What's without doubt though, is that there is no better way to keep yourself cool this summer than adding lots of dahi to your diet.