Here are our 11 best kebab recipes that include recipes of veg kabab, non veg kabab, Seekh kabab and kabab recipes in Hindi as well along with a step by step process. Also learn about How to Make Kebab by seeing videos. 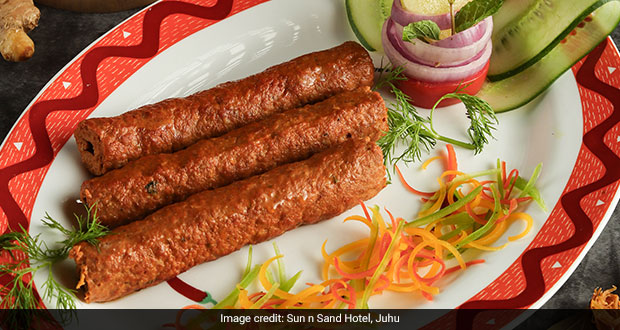 Easy Kebab Recipes- If you've grown up in North India or in fact around any Indian neighborhood, you'll be familiar with that sharp garam-masala infused whiff of tandoori chicken. It's delicious to a point that you start to salivate, almost instantly. You'll have to agree that a lovely platter of juicy kebabs is a great crowd pleaser. Kebabs are the perfect party snacks. The smokey, char-grilled aroma and melt-in-mouth texture can easily get you hooked.

Some say that kebabs actually originated in Turkey when soldiers grilled chunks of raw meat on swords in the battlefield. Whether or not that is true, they were first served somewhere in the Middle East. The word kebab is derived from an Arabic word 'Cabob' which means to burn or char. They are one of the most popular grills around the world.

Some say that kebabs actually originated in Turkey when soldiers grilled chunks of raw meat on swords in the battlefield. Whether or not that is true, they were first served somewhere in the Middle East. The word kebab is derived from an Arabic word 'Cabob' which means to burn or char. They are one of the most popular grills around the world.

Usually served as an appetizer with chutneys and dips, kebabs are made with minced meat and mild spices. Though lamb is the original meat used in kebabs, this dish has been localized to include beef, goat, chicken and other meat varieties. In India, kebab has been a symbol of opulence. Most of the famous kebabs like Galouti, Shami and Kakori originated in the Royal kitchens. Traditionally served in the Moghul courts, today it has transformed into a common street food.

Grill, bake or fry - Here are our 11 best kebab recipes which you must try!

Succulent tikkis made of chicken minced, assorted masalas and spinach. Goodness of spinach and chicken, together in melt in the mouth kebabs. Served with a sour-spicy yogurt chutney and a sweet date chutney. This kabab recipe is surely a hit snack at parties!

A great snack for dinner parties, these chicken kebabs are great to serve kids as well as adults. Image credits: iStock

Vegetarians rejoice! A melt in your mouth veg kabab recipe with  medley of mushrooms, potato and paneer, coated in besan and fried on slow heat. Served with a tangy achaari dip to balance the flavors.

A unique blend of potato and mushroom, cook this for your family on special occasions and savour with a distinct mango sauce.

A melange of potatoes, carrots and spinach coated with desiccated coconut and fried crisp. Served with a minty pine nut sauce. A veg kabab recipe with a healthy dose.

These melt-in-the-mouth kebabs are made with finely minced mutton and shallow fried in desi ghee and here is a quick and easy recipe for you to make these royal treats at home and relish as an appetizer. One of the most loved recipes of the Awadhi Cuisine. It is known to have originated in Lucknow. Minced meat kebabs rich in masalas made nawabi style. Usually served with the 'ulte tawa ka parantha'. (Recipe Video)

Galouti kebab are tender and juicy and are believed to have a melange of 150 spices when first invented.

Believed to have been originated during the Mughal era in the royal kitchens, shami kebab is made with very finely minced meat. A delectable snack made with minced mutton and a host of spices like red chilli, green chilli, black peppercorn, etc.

A delicious starter at dinner parties, this is super easy to cook!

The most popular among Kabab recipes, made with minced meat, these Seekh kebabs are grilled on skewers. Full of char grilled flavors, they are perfect as a starter for a dinner party. It can also be served in a naan and made into a wrap.

Promoted
Listen to the latest songs, only on JioSaavn.com
(Also see a healthy version of Chicken Seekh kebab in Hindi here)

Serve with mint chutney and a side of onion rings and lemon wedges, you won't need anything else to start the party!

Filled with the goodness of peas and spinach, these kebabs are healthy, delicious and just too easy to ignore! Easy and qick recipe for a vegetarian delight to add in to your dinner party menu. Vegetarian and garden fresh!

An inventive recipe of kebabs made with kidney beans or rajma. Crispy golden on the outside and soft and tangy on the inside. Rajma is a popular food in Indian cuisine, popularly cooked and eaten with rice, this kebab recipe might be a unique starter for your next dinner party.

A common Pakistani onion kebab with lemongrass and mint cooked in light oil. Soft, tender and succulent Pyaz ke kebab are appetizing when served with a choice of chutney, topped with coriander leaves.
(Also see the recipe of Pyazi Kebabs in Hindi here)

When served as an appetizer with a walnut, jaggery and tamarind sauce, Pyaz kebabs are a sure shot hit. Image credits: iStock

A good-for-you veg kebab recipe. Made from paneer, creamy yogurt and raisins. Delicious kebabs get a healthy makeover! These are melt in the mouth kebabs that are simply irresistible. Mostly found in North Indian restaurant menus and are loved by many for their soft mouth melting interior texture while they are crisp from outside.

Dahi ke kebabs are great to make on occasions like when you have guests over or for festive meals.

A vegetarian's delight, this paneer kebab recipe is as delicious as it can get! Juicy paneer cubes marinated in a myriad of spices and shallow fried to perfection. Tossed with capsicum and tomatoes, this can be the star appetizer of your next party.

Mouth watering, wasn't it? Let us know your favorite kebabs!