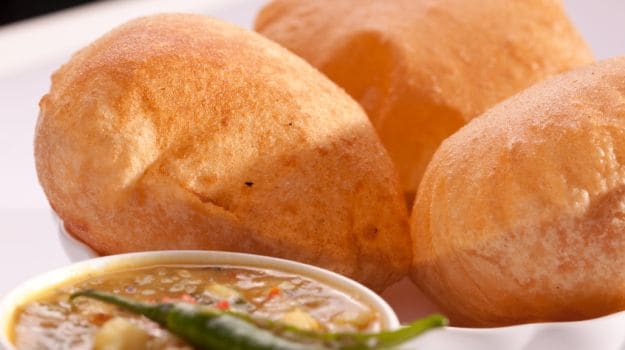 No one really confesses to liking it anymore, but poorihas to be India’s favourite breakfast dish across the board. From the nagori (with halwa) of old Delhi — small fried bread seasoned with salt and cumin – and  the various versions of kachoriserved piping hot with potato curries all through the Indo-Gangetic belt to the luchi of Bengal and the festive shrikhand-poori of the Western states, poori is a pan-India bread, found in almost all kitchens of the Subcontinent.

It is also inevitably linked to festivities and rituals of the Hindu calendar. No auspicious day can be complete without the frying of the bread in a kadai full of hot ghee or oil. You may not have thought much about this practice, but it is one rooted deeply in the Vedic way of cooking.

The ritualistic and bound-by-strict-rules traditional Vedic kitchen had some rather strange practices. Treating food as “pucca khana” and “kachcha khana” was one of them. Ghee, as a medium through which sacrificial offerings reached the gods, was always revered as a valuable ingredient in Vedic cooking. Anything cooked in ghee thus became “pucca” or “saccha” khana—pure food, the highest category of all that could be consumed by Vedic society.

Kachcha khana, on the other hand, was food, not dipped in ghee. It could be raw foods or food “partially” cooked—like roti, the flat bread cooked on a griddle. Kadhai-chadhana, putting the wok on the flame literally (or frying) thus became part of the ritualistic way of cooking in early Indian society. And pooris found their way on to our plates during each festival and as part of morning meals, where fried food was preferred also as a way to preserve it in the absence of refrigeration.

Poori Aloo has to be the all-time favourite combination across regions in India. The potatoes are curried with different combination of spices depending on the region—in old Delhi, for instance, the potato curry is cooked with a dash of fenugreek, while in Agra, the spice mix is dominated by black pepper. This was typically served in donas, cups made with sal leaves and covered with the fresh poori, in the bazaars at single-dish shops specialising in the business of breakfasts. In Punjab, bhatura, a version of the poori, made from refined flour and fermented, is the breakfast dish of choice, eaten with chickpeas. It was a snack brought to Delhi, post partition and is now indelibly associated with the street food culture of the Capital.

But poori also made for a convenient snack, especially while travelling, since it would not spoil. So dry preparations of potatoes, tempered with just a little cumin and asafoetida became convenient, to be rolled into the poori and eaten in one go.

Poori can, of course, be turned exotic. You could add natural colour (beetroot or spinach) to the dough and serve it during festive occasions like Holi, the festival of colours. Or, you could season the plain dough with a variety of spice mixes to make it into a kachori—the stuffed poori.

The traditional stuffing for kachori has always been lentils, more specifically the white urad, soaked and ground. This is tempered with asafoetida, ginger and green chillies for a much-needed bite and stuffed into the poori dough, before being rolled out and fried. Like the poori, kachori is predominantly eaten with a gravy of potatoes although it may be entirely satisfactory to eat it solo, or with a crisp namkeen and some red chilli pickle.

When palates seek something sweeter, the savoury-sweet combination works too. Kachoriwith jalebi or poori with Shrikhand—during Diwali in Gujarat and Maharashtra—work on the same principle. As does the famous Nagori Halwa of Delhi and the poori-halwa tradition of the Navratras.

Promoted
Listen to the latest songs, only on JioSaavn.com
But stuffed pooris or kachoris turned inventive too. Green peas, which only came in with Colonial trade to India, became the exotic “English” vegetables of the Indian elite. They started being increasingly used in Indian dishes, in combination with keema (Keema Mattar), with khoya (Khoya Matar) and much later with paneer, the cheese that came from Punjab. They also started being stuffed in samosas and kachoris. And thus we have traditions such as the matar-stuffedkachori of UP, Rajasthan and Radha Ballabi of Bengal.

Finally, though poori may be ritualistic food, it is a mistake to think of it only as part of a combo with potatoes, peas and other vegetarian side dishes. Poori-kebab or poori-meat curry is a fairly established tradition amongst the Kayasthas of UP and old Delhi, the community to which my family belongs, and that exhibits even today the unmistakable imprint of India’s Ganga-Jamuni culture. The Vedic fried bread coming together with the Persian-influenced kebab is a befitting metaphor.