Jhal Muri: What Makes This Kolkata Street Food So Popular? 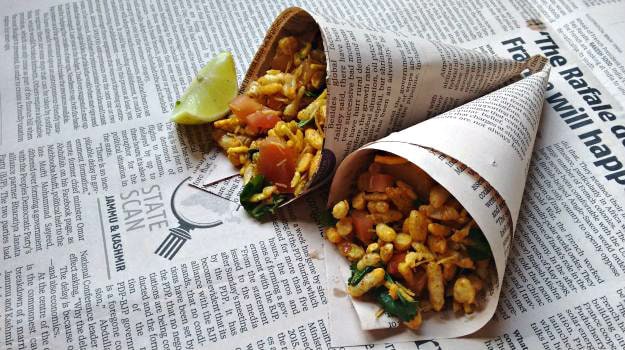 From couples at Victoria Memorial and college kids returning from class, to friends gathering every weekend for the quintessential adda - life in Kolkata would be quite different if not for its street food. It adds that extra flavour to life I suppose. And Kolkata street food would be incomplete without Jhal Muri (spiced puffed rice). In fact, most Bengali homes can't think of not having it as a regular snack, which they even try to replicate at home.

Made with puffed rice, chopped boiled potatoes, tomatoes, cucumber, roasted peanuts, bits of coconut, and chopped green chillies; all of which is tossed in a special spice mix, and of course mustard oil, and finally topped with a squeeze of lemon, freshly chopped coriander leaves, and a sprinkle of sev (fried Bengal gram semolina). The Jhal Muri is literally a customised treat. And onions are usually avoided, unless someone specifically wants it, which is rarely the case.

The special spice mix is made by grinding roasted cumin seeds, salt, black or rock salt, amchoor (dried mango powder), dried red chilli powder, and a bit of garam masala (and this is optional) together. Some might even want to add roasted bay leaf to the mix, and grind the entire mixture together to a fine powder. This spice mix is the only thing that's made ahead and stored.

What's most important is the variety of puffed rice used; in Kolkata, we usually end up using the small and stubby variety. And second is the speed and dexterity with which it's made, because you can't be too slow at it. A little extra time taken, and the snack can become soggy, and that's a big no-no. A lot of people prefer to roast the puffed rice slightly beforehand, just to avoid it from becoming soft from storage. However, if you're making it at home, and have bought the puffed rice fresh and stored it correctly (in a dry airtight container), you may not need to roast it again. But if you do roast it, make sure the puffed rice stays white, so don't keep it on the flame for more than a couple of minute or so.

In fact watching the muri being made can be fascinating; I have often wondered how these vendors use a thin, sharp, and long blade to dice the potatoes, cucumber, tomatoes etc with such speed, and not injure themselves. It comes from practice of course, but the sight never gets boring.

The Jhal Muri, which is essentially an adapted version of the bhel, or the dry bhel for that matter, but made quite differently, is a very Bengali thing, even though people across Kolkata have grown to love it. And everyone has their own special requests - less potato, less chilli, more spices, and less coriander, and so on. Given that none of the ingredients are kept premixed, it's easy to ask for your own version.

Now here are some tweaks that you might want to take note of: if you don't like yours soggy at all, skip the tomatoes; if you're on a diet, skip the potatoes; boiled black chana can be added for extra flavour; ask for onions if the pungency from tomatoes is not enough for you. A lot of places also add juice from tamarind pulp to the mixture, but if you don't like yours too tangy, ask the guy to skip it.

Jhalmuriwalas dot the streets and lanes of the city, and each neighbourhood proudly boasts of their 'guy'. Funny that such a simple mix of ingredients can demand such finesse - a little of extra something, or a little less of something else, and the whole concoction is thrown off gear. And that we can never have, can we?