The Tale of Thukpa: What Lends Flavour to this Comforting Noodle Soup? 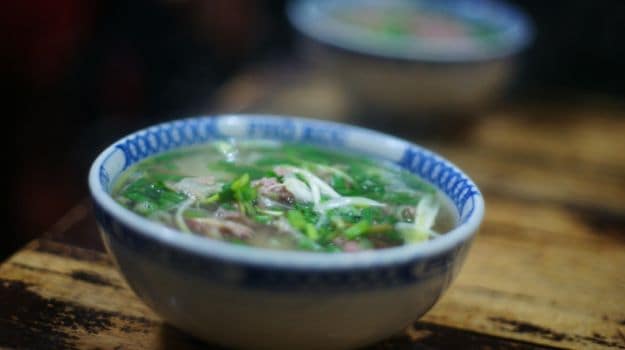 In many ways, thukpa is quite synonymous with momos. Both are comfort food that needs no special occasion for anyone to indulge in. The many trips one has made to Majnu Ka Tilla, the Tibetan refugee colony in North Delhi, back in college days, only confirms the popularity of this soupy dish which is filling, nutritious and extremely delicious.

What's also common between momo and thukpa is their arduous journey from the mountainous Tibet, whereon they travelled widely and influenced other cultures to embrace them along the way. I do not know of more popular immigrant food than thukpa and momo. Credit must go to the immigrants from Tibet who carried their cuisine along and popularised it so much so that it is today a comfort food loved and relished by every palate across the country.

If there is one thing that the Tibetans in India hold close to their hearts, it is this food that reminds them of their roots. In icy Tibet, what keeps them warm and cosy is a bowl of thukpa prepared with hand-made noodle of flour, which they relish either for lunch or dinner. What's special about their thukpa is the yak meat they add in it. They also use minced mutton for flavouring along with an assortment of greens. It is said that their New Year is incomplete without thukpa.

Even though many call thukpa a soup, I refuse to call it so. It is not a soup but a watery noodle dish, which comes with assorted vegetables and derives its main flavour from the minced meat that's added into it along with ginger and garlic. Perhaps it is because of its sheer simplicity and nutritious value that it has become one of the most popular dishes in today's gastronomic landscape.

Thukpa and Its Variations

The proximity with Tibet has ensured that thukpa is equally at home in Bhutan and Nepal, where it has become an integral part of the people's diets. Of course, the preparation differs slightly from one another. My Nepali friends are never tired of feasting on their thukpa. Even their favourite Wai Wai is many times prepared like thukpa. They make it watery and add vegetables and it becomes a meal in itself. Their version of thukpa is somewhat spicy. Nepalese people anyway love spicy food. In their version, expect some chilli powder that adds not just to the fieriness but to the colour as well, while some even venture to add garam masala.

Little shacks and restaurants in the city are dotted with servings of thukpa. It is the most sought-after meal that hungry and tired travellers back from their expeditions look forward to slurping to their hearts contend. Every Nepali kitchen will dish this out when they want a quick meal. Even then, locals too head out to eat this in restaurants.

It is with equal passion that Bhutanese people accept and embrace this dish. So, through the length and breadth of Thimpu and beyond, there are vendors and restaurants serving thukpa. And it is the perfect meal for locals to fight cold. They love what they call dehthuk, which is thukpa or rice porridge. They pressure cook the rice and when it is done, grind and add condiments like ginger, garlic, cottage cheese and pepper to it. Finally, it is topped with a little butter and salt to go according to one's taste. The other version is thenthuk, which is made of flat noodles; and bakhthu that's like cowrie thukpa. Cowrie thukpa is shaped like macaroni but made from maida.

The Bhutanese version also uses beef wherein they first cook the bony portion of beef in a big pot. They allow the water to boil on slow fire to thicken it. Some even add a handful of rice but that needs constant stirring so that it does not thicken. Freshly-pounded ginger gives it that sharp flavour. Then depending on their taste, sauces and vegetables are added.

The Bowl of Comfort

So, wherever the Tibetans went thukpa followed. In the Northeast, particularly in Sikkim and Arunachal Pradesh, and Darjeeling in West Bengal, thukpa is hugely popular. Arunachal Pradesh's proximity with Bhutan, Tibet and China is perhaps one of the main reasons why this noodle soup has made such a deep inroad into the food habits of the community. Among the Monpa community that lives mostly in the West Kameng district of the state, thukpa is a staple diet. But that is only expected as Monpa shares a close cultural affinity with what's loosely termed as "Sharchops", Indo-Mongoloid people who mostly live in the eastern districts of Bhutan.

The Monpas usually have it for lunch and dinner, but would also venture to have it even in the late afternoon when hunger pangs seize them. One of the most popular varieties is called Putang Thukpa, meaning noodles made of buckwheat which is made into a curry and flavoured with yak meat or dry fish. Into the boiling broth they are likely to add seasonal greens and lots of herbs.

In Sikkim, thukpa is something that cuts across all communities. And interestingly, some people love to pair it with momos, where they like to eat the dumplings and wash them down with thukpa. It is a combination that has worked really well in most homes and even in restaurants. Of course, with chillies, garlic and coriander for flavouring.

My Ladakhi friend once told me how thukpa is such an integral part of their diet.  Be it thenthuk (noodle soup), gyathuk (dry noodles topped with meat curry) or simply ngamthuk (soup of barley flour made in veg/meat stock), it is a staple for every household in Ladakh.

People in Darjeeling simply cannot do without their bowl of thukpa. It is available in every nook and corner of the city. It is especially sought after in winter. This is how they prepare it: a big pot is filled with water and kept over a slow fire. They throw in lots of mutton bones that gradually release flavour as they get cooked. Strangely, although they eat pork, pork thukpa is quite uncommon.

When the water boils, they take out the stock in a bowl and add cooked noodles into it along with shredded greens, including smoked chilli chutney for some pungency. Spring onions are a must, without which the locals would reject it as incomplete. The flavour also gets enhanced when they mix good portion of cooked minced meat. In Darjeeling, they say, what's common between the rich and the poor is thukpa. It's amazing how food always builds bridges everywhere.

If you are now tempted to try making this dish at home, here's a simple recipe to help you get started:

2. Now add the chopped onion and carrots and saute for 1-2 minutes.

3. Then add ginger, garlic, spring onions and green chilies, and saute for another minute.

4. Sprinkle salt, pepper and some fresh coriander leaves and saute for 1 more minute.

6. Add soya sauce and honey, and stir the broth gently. Then cover it with a lid and simmer for 10 minutes.

7. Remove the chicken from the broth and shred it.

8. Add handful of egg noodles in the broth and cook for 5 minutes.

9. Now add the shredded chicken back into the broth and let it cook for 2-3 minutes.

10. Garnish with some spring onions, green chillies and fresh coriander.

Promoted
Listen to the latest songs, only on JioSaavn.com
Hoihnu Hauzel is a journalist and a food & travel writer. She spent over 15 years reporting and writing extensively on travel, hospitality and lifestyle for different leading dailies, untill she decided to pursue an independent writing career. Her book, The Essential Northeast Cookbook, published by Penguin, has been instrumental in introducing and popularising Northeast cuisine outside the region. She is particularly keen on food history linked with customs and traditions of the people of Northeast.

The opinions expressed within this article are the personal opinions of the author. NDTV is not responsible for the accuracy, completeness, suitability, or validity of any information on this article. All information is provided on an as-is basis. The information, facts or opinions appearing in the article do not reflect the views of NDTV and NDTV does not assume any responsibility or liability for the same/