Book Review: 'The Flavour of Spice'

Celebrating spices in all its glory, noted food writer Marryam H Reshi in her book, 'The Flavour of Spice' embarks upon a delightful journey tracing their history as far back as possible.This book is a delectable collection of anecdotes that Marryam has picked up in her long and wide food journey. 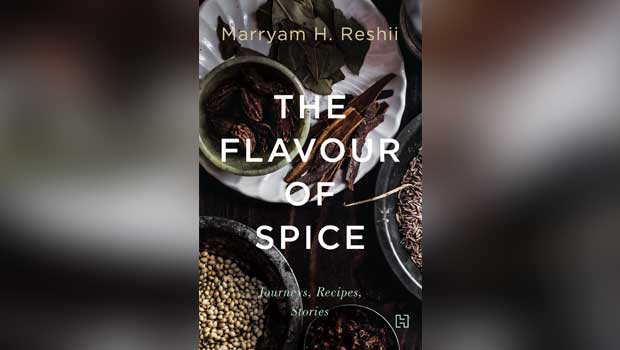 Highlights
Celebrating spices in all its glory, noted food writer Marryam H Reshi in her book, 'The Flavour of Spice' embarks upon a delightful journey tracing their history as far back as possible. Travelling across the globe, chasing lab experts, getting held at airports  for carrying too many stashes of spice to forcing her friends into getting her samples from abroad, this book is a delectable collection of anecdotes that Marryam has picked up in her long and wide food journey.

Considering the intimate relationship between Indian food and spices, the lack of literature is baffling, Reshi points out in the very first section of the book. Marryam's concern is so fresh and genuine.  Children in their geography classes are taught about winter crops, summer crops, and all kinds of soils they are grown in, but not about spices. Shop owners, who are in business of selling these spices, are often unaware themselves about where their stock is coming from. Maryam notes how most of us are guilty of crediting a majority of our Chilli produce to Kashmir, whereas 75 percent of our total produce comes from Andhra Pradesh. She also busts many popular beliefs we tend to have about Chillies. India which happens to be the world's largest producer, consumer and exporter of chillies, was only introduced to the fiery spice 450 years ago through the Portuguese. She also challenges the idea of Indians taking pride on their palate being one of the hottest and chilliest in the world. In comparison to the hot and pungent affair across South America and China, India's use of chilly is pretty nominal. India's spiciest bhut jhalokia, Kashmiri mirch and Sikkim's dallae khusrani are hot but there aren't many Indian varieties that pack the punch in comparison to "fiery red devils" in other countries, notes Reshi.

The overarching narrative of the history of spices, some of them even going back to Biblical times, does at no point get too verbose and heavy for the reader. The flavour of spice perfectly interspersed with her banter and encounters with chefs, housewives and plantation and factory owners in between. Every chapter concludes with a handful of recipes from around the world.

A View From Across The Country And Beyond

Marryam's investigation takes her to the hubs of these spices. Guntur for chillies, Erode for Turmeric, Unjha for cumin are townships more popular for their spice cultivation than anything else, and Reshi's curious account keeps you engaged. Her journey on foreign shores is no less enthralling. Her dejection at finding no trace of fenugreek in Athens in the present age, which happens to be the place of fenugreek's origin, her fascinating search of cinnamon in Sri Lanka or strolling through the saffron markets of Iran make for an informative read.

The Flavour of Spice is divided in 6 sections, 'The Big Four' which includes Chilli, Cumin, Turmeric and Coriander. Next follows 'The Aromatics', which talks about Cinnamon, Saffron, Nutmeg and Mace, Pepper, Cardamom, Clove, Asafoetida, Kalpasi. The next section is dedicated to 'The Seed Spices' that deals with Fenugreek, Mustard, Poppy and other seed spices. The other three sections talk about various Spice Grinders, Spice Mixes and Spices abroad.

In the section of the book 'The Short History of Aromatics', Marryam tells us how spices have altered the course of world history in their own way. Roman emperor Nero burnt a year's of supply of cinnamon for the entire city at the funeral of his wife to atone for his role in her death. In the medieval times, the traders would set out on their ships for months and years in the hunt for spices. They also concocted many fanciful stories about fire-spewing dragons and impregnable jungles to keep regular people away from getting to the sources of these spices. Such was the importance of spices. People were willing to risk anything to keep their trade secrets in.

These spices are a mystery. These spices area storehouse of secrets. And there are a few of them that have had the privilege to travel beyond kitchens too. For instance, the bright hued turmeric. Marryam writes that turmeric is special in Indian context as it is the only spice that enjoys a 'devotional distinction', for its immense medicinal and antiseptic uses.

It is interesting to note that Turmeric is used almost in every Indian preparation, but that is not so much for its astringent flavour but for the rich golden hue it imparts to any dish it is added to. Kashmiris use it because they don't want their curries to be "unpleasantly white", Chettinad and Nair cuisines too have an indispensable role of turmeric which is primarily for its colour. Marryam also finds exceptions to the rule through dishes like rajma chawal from Punjab or Bengali delicacies like doi maach, shukto and chorchori - none of them use turmeric. Muslim cooking is not so dependent on the spice either. The spice happens to be the most culturally important spice in India. For instance, the age old Ayurvedic remedy for stronger immunity in haldi doodh or turmeric's role in our beauty and wedding rituals. Marryam makes note of an interesting ritual of Manjal Kulichi, an intrinsic concept in Tamil Nadu which involves bathing in turmeric water. Turmeric is seen as an offering fit for God's too. During Pongal, the state's most important festival, fresh haldi, along with leaves are offered to deity.

Another favourite section of the book has to be the 'Spice Mixes'. From the mysterious and exclusive Kashmiri ver to the majestic panch phoron and garam masala, we Indians not only love our spices individually but can celebrate their flavours in eclectic combinations too.

CommentsThere's nothing bland about this earnest documentation. Reshi's journey, stories and bunch of assorted recipes make for a fascinating read.