Besan has been a staple food in Indian kitchens since time immemorial and one can easily find it in every household. 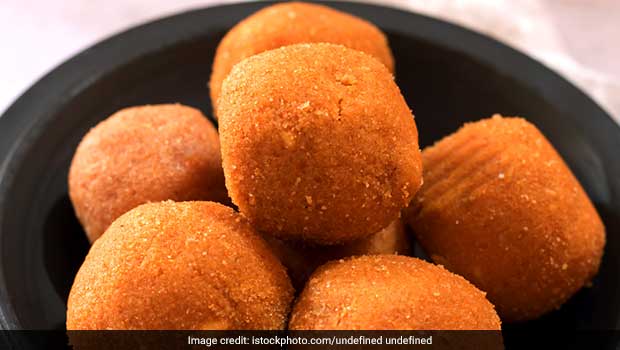 Besan makes for a credible base for many sweet dishes

Besan has been a staple food in Indian kitchens since time immemorial. Like all-purpose flour (maida) and wheat flour (atta), you'll always find gram flour (besan) somewhere in the kitchen pantry. Besan also known as chickpea flour, is derived from chickpea or Bengal gram. It is used to make a number of dishes at home and that is why it's an important item in our grocery shopping list. Besan flour is diluted in water to make cheelas or rolled and fried to make pakodasforkadhi. It is also used to make dhoklas and Rajasthani cuisine special – gatte ki sabzi. Besan can be used in various delicacies. It also plays an important role in various natural skin care regimes. Besan also makes for a credible base for many sweet dishes as well. Yes, besan-based desserts are very common and are seen as healthful and delicious at the same time.

Here are some exciting desserts you can make at home with besan:

We have all grown up savouring this sweet delicacy. Be it a festival, a religious event or a wedding function, ladoo is one traditional Indian sweet that has to be there to mark the celebrations. Besan ke laddo, unlike other ladoos, are not grainy and turn into a soft, powder-like form the moment you bite into them.

This is a signature dish of the Indian state of Karnataka and mostly prepared during Diwali. Made of besan, ghee, sugar and water, this soft, gooey sweet will win your heart right away.

Giving a modern twist to the traditional halwa, this unique dessert comprises plum compote laid on a bed of textured biscuit made with besan and maida. With a pista elaichi paste accompanying the dish, this triple-layered dish is worth trying.

This is basically halwa made with besan that retains the soft, squidgy texture and the tantalising taste of halwa dish. This rich, creamy besan paste is usually served during religious occasions but gorging on it otherwise is not a crime. This delectable dessert is best served hot and can be eaten as is or with pooris.

​Do try the above dessert recipes with besan flour as the hero ingredient, and take your baking game to the next level. Enjoy cooking and eating them.