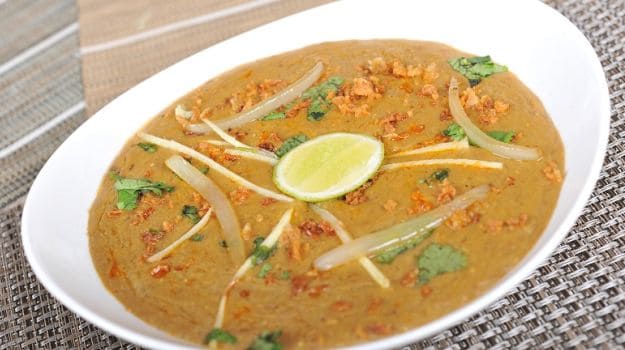 During the month of Ramzan, the biggest crowds are to be seen outside Hyderabad's Pista House, purveyor of all manner of baked goods and lavish Hyderabadi dishes. But what it is most famous for is its haleem, unctuous and nourishing. Haleem is a simple, porridge-like dish made from wheat, lentils and meat (usually mutton in India) that has been slow-cooked for many hours, but recently elevated to epic heights. In 2010, Hyderabadi haleem was bestowed the status of Geographical Indication Status (GIS), purportedly the first non-vegetarian Indian dish to be so designated. To qualify, it must have ten parts of goat meat to four parts of cracked wheat, the ghee should be laboratory certified as pure and the haleem should be prepared in a copper pot over firewood for an arm-numbing twelve hours.

The garnish for the haleem is pretty important also; it is always served with birista (crisp, fried onions), lemon and coriander, but my book of Memon Recipes tells me that the community also adds green chilli, ginger slices that have been fried and a teaspoon or so of spices. All of this is added to the main dish, which is then drenched in ghee and served hot with naan. The naan helps to cut the spice. The book also tells me to add baking soda while preparing the haleem, but that is something I am completely unfamiliar with.

In Margaret Shaida's highly acclaimed cookbook, The Legendary Cuisine of Persia, she traces the origin of haleem all the way back to the 6th Century Persian King Khusrow. After the Muslim conquest of Persia in the next century, it became a most beloved dish. She believed that it is called harissa or harees in many Arab countries.

Meanwhile, Hyderabadi food expert Pratibha Karan writes in her A Princely Legacy - Hyderabadi Cuisine and Biryani, "In the late 7th century, Caliph Mu'awiya of Damascus, received a delegation of Arabian Yemenis. According to medieval historians who wrote about the encounter, the Caliph's first question to his visitors addressed something more urgent than political matters. Years earlier, on a journey to Arabia, he had eaten an exquisite dish, a porridge of meat and wheat. Did they know how to make it? They did."

Haleem has a long, long history in India that possibly wends its way back to the Mughals. The dishes served in Mughal courts revealed their diverse origins - Turkic, Persian and Arabic. In the beautifully-written Ain-i-Akbari, Emperor Akbar's courtier, Abul Fazl mentions haleem, which was a stew of meat, cracked wheat, turnips, carrots and spinach; and harissa, which was a porridge of meat and cracked wheat. Haleem and harissa were both Arabic words and no doubt the haleem we eat today is quite removed in taste from that which was served at the courts.

The inclusion of grain was a very important part of the Mughal diet, especially from the tenth century onwards, as they moved into grain-growing areas. Although meat was often served in Mughal courts, many of the Mughal emperors often eschewed it. Humayun mostly shunned beef and became vegetarian for a while, while Akbar "was practically a vegetarian, though his table was very sumptuous," writes renowned food historian, K T Achaya in The Story of Our Food. Abul Fazl writes that Akbar believed "it is indeed from ignorance and cruelty that, although various kinds of foods are obtainable, men are bent upon injuring living creatures, and lending a ready hand in killing and eating them." And the puritan Aurangzeb was almost completely vegetarian and fasted a lot, much to the dismay of his doctor who worried about his skinny frame - "he only drank a little water and ate a small quantity of millet bread," he grumbled.

When the Mughals were slowly edged out, regional governors became more powerful; Hyderabad, Awadh, Kashmir, Lahore and Murshidabad. Their courtly fare reveals many Mughal traditions that were refined and transformed into the dishes that we are familiar with today. In Colleen Taylor Sen's Feasts and Fasts: A History of Food in India, she writes that the classic Hyderabadi haleem that most of us are familiar with today, may be "a variant of the Arabian harissa introduced by the Nizam's Arab (mainly Yemeni) palace guards in the nineteenth Century." It was made famous by a nobleman, who served it at his feasts. Today, its popularity in the Barkas area in Hyderabad, home of the erstwhile Nizam's barracks, may be seen as proof of its military origins.

The original haleem is made with lamb, goat, buff, veal and beef, but nowadays also chicken and vegetarian varieties (sacrilege!). In case you are unlucky enough not to reside in Hyderabad, Pista House will hurtle its haleem to you via courier, across the country. You will notice that there is no lentil component to the Hyderabadi haleem, whereas in other versions, the dal is essential to the dish. The former is also spicier in taste.

In Hyderabad's Barkas area, a sweet haleem is also available. It is called harees (its Arabic name) and is sweetened with sugar, and eaten for breakfast. There is another type of harees available also, possibly the closest to its Arabic predecessor - this one is flavoured only with ghee.

The best type to taste all these delicacies is of course during Muharram; there is no doubt that haleem is the king of the Iftar feast during Ramzan. But why? It is my Muslim friends' fervent belief that it was a dish consumed by the warriors fighting in the battle of Karbala; it is perhaps these origins in piety that have filtered down and coalesced into haleem's reputation as a Ramzan dish.