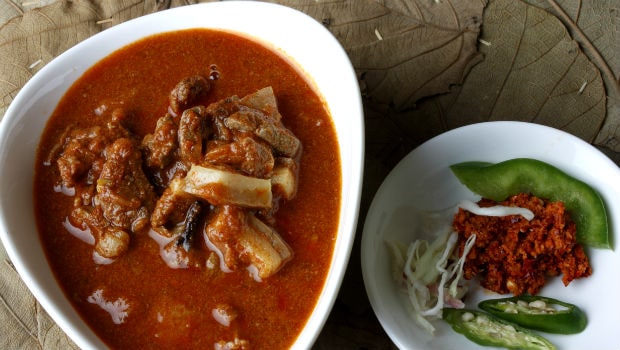 Sorpotel is a red meat curry that is wonderfully tangy and spicy at the same time. It is a dish of Portuguese origin, now cooked in the Konkan region of India - Goa, Mangalore and Maharasthra's East India Community. Goan Sorpotel is generally made using pork, but sometimes it also includes beef, mutton or chicken. Though originally intended to be made solely on the occasion of Christmas, it often appears at parties and other festivities today. It is very popular among Catholic households of Goa, as well as food lovers who have had this dish at least once.

Sorpotel is often made in huge quantities for festivals, weddings and birthday parties. Thus, the preparation for the curry begins several days in advance. This is a boon in disguise, as Sorpotel gets better as it grows older. The meat is marinated in vinegar and chillies and allowed to fuse in their flavours for a considerable amount of time. Sorpotel is served with sannas, which are spongy, slightly sweet and steamed rice cakes. The rice batter is fermented overnight with the addition of local toddy, or palm wine, resulting in fluffy cakes. Other alternative side dishes with the Sorpotel curry include bread, plain rice, buns or along with poached eggs for breakfast.

The traditional version of Sorpotel utilises ingredients such as meat, offal, vinegar, and alcohol or liquor. The word Soro, in Konkani, literally means alcohol. The name of the original dish, i.e. Sarapatel, also can be literally translated as 'mishmash'. This refers to the various kinds of meat used to thicken the gravy - pork heart, liver and even pork blood! However, in the modern-day context, obtaining pork blood gets very difficult and is generally avoided.

Each household has a different procedure of making this classic Goan dish. Traditional Goan households preferred the use of a log fire and an earthen pot to cook the perfect Sorpotel, often adding their own personal touch to the curry. The difference lies in the type of chilli, seeded or de-seeded, that is added to this delicious curry. This determines how fiery hot or spicy the Sorpotel will come out to be. Moreover, the Sorpotel is rarely ever commercially produced. So, the only chance you might have to taste it is to visit a traditional Mangalorean or Goan house! There are also some regional varieties - the East Indian Sorpotel is a green curry in contrast to the Goan and Mangalorean versions, which are both of a vivid red hue.

Sorpotel is the Goan nomenclature for the North-East Brazilian dish named Sarapatel. However, that's not where the dish is originally from. This dish is from the region of Alentejo in Portugal, in Western Europe. The Portugal colonizers carried forward this traditional meat curry to the countries they conquered. Today, Sorpotel is very much a part of Goan cuisine, as much as the popular Vindaloo or Balchao. Though there are several regional varieties of the Sorpotel, it retains its authentic red colour and flavourful taste with delicious spices and chunks of meat.

The Spices That Go into its Making

As mentioned earlier, the variety of Sorpotel varies from household to household, and region to region. The flavours and spices are used in different proportions according to individual preference. Some use more vinegar, whereas some prefer adding more chillies. Some add the meat directly to the gravy, whereas others sauté the meat before cooking.

(Also Read: 7 Asian Condiments and Sauces For a Perfect Kick in Your Oriental Meals)

The Indian version of Sorpotel uses pork liver, heart, and blood along with offal. This makes the dish full of ample amounts of fat, which is vital for the blending of flavours. Moreover, the presence of red chillies doesn't make the Sorpotel overly spicy. In fact, it adds to the distinct flavour of the curry. Some households also prefer adding a small amount of alcohol to the recipe.

The method for cooking the dish remains mostly the same, where the meat is par-boiled and then chopped into tiny pieces and fried in its own fat. Then, the masala or sauce is prepared and the meat is added and allowed to soak in the spices.

Here's a quick recipe for you to try - Pork Sorpotel

The best part of the dish is that it can be cooked many days in advance and the curry only tastes better with every passing day. It can be easily cooked with ingredients found within the space of the Indian kitchen. Today, Sorpotel has become a must-have for all major festivities in Goa. No wedding feast is complete without this curry. The significance of the dish is highlighted even more because it is one of the original, exotic dishes made from pork liver, which has been a major ingredient in Portugese cooking. It is also a delicate dish and takes a lifetime to master.