Drumstick or Moringa: 3 South Indian Recipes for Cooking this Superfood 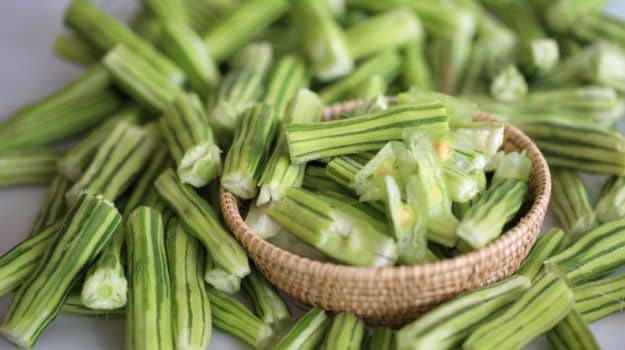 Moringa. What’s the fuss all about? Yes, the world might have put moringa on the pedestal as a superfood but across South India it has been an integral part of the diet for years. Moringa is also the botanical name (Moringa Oleifera) for drumstick that takes its name from Murungai (Tamil) or Muringa (Malayalam). While it grows in most parts of India, it’s probably more ubiquitous in Southern India. It’s also common in Burma, Cambodia and Thailand where the drumstick is often cooked in curries with seafood.

Drumstick trees are ‘deep rooted’ in folklore and legends across Southern India, it’s also one of those rare trees where every part can be put to good use. The bark, sap, roots, leaves, seeds and flowers are all used in traditional medicine and now it’s become common to see Moringa powder in gourmet and health food stores in the US. The leaves and drumsticks are a significant source of Vitamin C and rich in minerals like iron – one of the reasons why it’s always been recommended as a nutritional source for children or expectant mothers.

At a time when the presence of pesticides in vegetables and fruits have become a huge concern, drumstick is one of the safest options and almost organic by default. The trees don’t need much care or rainfall and there have been quite a few recent instances when farmers have turned to cultivating drumstick in drought hit areas in Tamil Nadu, thanks to the global reach of moringa.

Drumstick and sambar are inseparable; it’s almost the default option for drumstick in kitchens in Tamil Nadu and Kerala. The drumstick lends a subtle yet fragrant flavour to the sambar, and most often kids are encouraged to chew on the drumsticks to max out on the nutrients.

The vegetable is also commonly used in avial in Kerala along with an assortment of other vegetables. But the drumstick does more than just float in sambars and avials; it adds a great element to gravies cooked with meat. If you’re willing to labour in the kitchen and remove the inner flesh from the drumstick (after boiling it), you can make scrumptious lentil vadas or add it to the drumstick leaf (Murungai Elai) soup. The drumstick vada can also be made with drumstick flowers.

Recipes to Try at Home

Drumstick dishes are usually not common place at luxury hotels, they are certainly not ‘cutlery friendly’. This home-style recipe makes a great accompaniment with pepper rasam and rice.

1. Clean and wash the drumsticks, and remove the ends. Cut it into smaller (finger-sized) pieces.

2. Heat oil, add the tempering items, garlic and onions (after the spices splutter) and fry till golden brown.

3. Add the drumstick, red chilli powder and stir, then add small quantity of water to cover the drumsticks. Cover with a lid and cook till tender.

4. Grind coconut, fennel seeds with a small quantity of water to make masala and add to the drumsticks with salt to taste.

5. Cook till the gravy becomes thick.

I first tried this dish at a home in Chettinad and was amazed at the flavour the drumstick adds to the Mutton masala. Mrs Latha Natarajan in Chennai is a storehouse of information on Chettinad recipes. This is her recipe; that works best with steamed rice or dosas.

1. Pressure cook the mutton with ginger garlic paste, salt and turmeric powder for 5 minutes and keep it aside.

3. Heat oil in a pan, add bay leaves, cloves and fresh mint. Then add the onion paste and cook for a few minutes. Add the tomato paste.

5. Add drumstick and sauté it. Add the pressure cooked mutton along with the broth to this mixture and boil on a medium flame till the drumstick is cooked. Garnish with fresh coriander leaves.

I’ve often found the best sambar in Kerala in the Thrissur, Ernakulam and Palakkad belt. Wedding Sadyas (feasts) in this part of Kerala are almost always judged on the sambar and the payasam (kheer). This is a typical Drumstick Sambar recipe from one of the tharavads (anscestral homes) in the Thrissur area where the strong presence of coconut works really well in tandem with the flavour of drumstick.

1. Soak tamarind in water and keep aside.

2. Pressure cook toor dal and keep it aside.

4. Extract the tamarind water from the tamarind and add it to the above sambar mix and let it boil for a few minutes.

5. Stir fry coconut with the other half of the shallots in coconut oil. Blend this in a mixer once it cools down. Add the sambar powder to this mixture and then blend this with the toor dal. Add this mixture to the boiling water.

6. For the tempering: add mustard seeds to 2 teaspoons of coconut oil; once it splutters, add curry leaves and red chillies.

7. Add this to the sambar and garnish with fresh coriander.