Idiyappam: How to Make These String Hoppers from South India 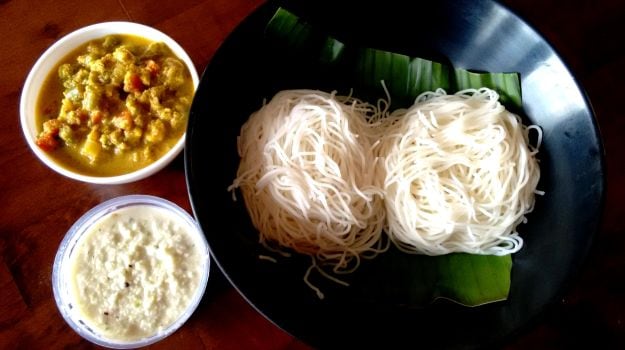 In many ways former Sri Lankan cricket captain Arjuna Ranatunga epitomised Sri Lankan cool; unflustered and cool as a cucumber even in high pressure run chases. I felt the same relaxed vibe in Chef Wijendra’s kitchen at the Anantara Peace Haven Tangalle Resort along Sri Lanka’s palm-fringed southern coastline. He’d promised to share some of his signature recipes that he’d learned from his mother at Galle. It all began with a Sri Lankan favourite – string hoppers.

I’m certainly no stranger to idiyappam or String hoppers. It’s one dish that unites much of South India at breakfast and if some theories are accurate, has been so for almost two millennia. Idiyappam in Tamil Nadu and Kerala, nool puttu in Coorg and southern Kannada areas of Karnataka, and also puttumayam in Malaysia; string hoppers go by different names but are cooked in all these regions following a near identical template. While it’s not every day fare in most parts of South India, it is almost a staple in most parts of Sri Lanka. There’s another key difference, while the idiyappam in most parts of South India is crafted white rice, it’s common to spot both brown rice and white rice variants in Sri Lanka.

The cooking process itself is not very complicated:

1. Keep adding water to rice flour ensuring that the paste doesn’t have any lumps. Add a pinch of salt to the mixture. It’s best to use your hands instead of a spoon to mix the dough.

2. Transfer the mixture to an idiyappam mould.

3. Squeeze the mixture through the mould in a circular motion on to a special idiyappam steamer. You could also use an idli mould. (Grease the mould with a little oil).

4. Pressure cook (without the stopper) on a medium flame for about 5-7 minutes.

Chef Wijendra reminisced about his childhood home in Galle where they would painstakingly hand pound the rice with a large mortar and pestle. He dared me to try a similar pestle at the resort and I finally obliged. After a serious workout for my arms – my gym instructor would probably approve, I managed to pound the rice to flour. The dish actually takes its name from the Tamil/Malayalam word for ‘idi’ meaning ‘broken down’ and ‘appam’ meaning ‘pancake’. While the dish’s other name ‘nool puttu’ refers to its ‘string’ or thread-like form, which eventually the British adopted for ‘string hoppers’.
The idiappam might taste similar everywhere but there’s a marked difference in the accompaniments. In Kerala, it’s usually served with a stew or a kurma while some of Chennai’s iconic restaurants do a pepper paya cooked with mutton trotters. Samco is one such legendary restaurant (it used to be a regular haunt for actor Kamal Haasan) that hasn’t tweaked its recipe for Pepper Paya since 1962. It’s similar to the Nihari Gosht cooked with lamb shanks. Quite a few meat shops in North Chennai supply specially smoked pieces of lamb shanks for paya.

1. Clean 4-5 lamb shanks (You can sprinkle some turmeric water and scrub the pieces).

2. Pressure cook the lamb shanks with ½ teaspoon of turmeric powder, two teaspoons of ginger garlic paste and salt to taste for about 30 minutes. Set the broth aside.

5. Add the lamb shanks (not the entire broth) to the gravy and cook for 10 minutes.

6. Add the broth and pressure cook for 20 minutes.

Idiyappam is served in most vegetarian restaurants in Chennai and Tamil Nadu as an anytime meal or a light snack for dinner with Vegetable Kurma and/or what the locals call Tenga Paal (Coconut milk). You can try this at home by adding a small quantity of sugar and powdered cardamom to coconut milk. The other easy and healthy way to eat idiyappam is with a sprinkle of freshly ground coconut mixed with sugar or jaggery. In Sri Lanka, the idiyappam is served with a curry and also pol (coconut) sambal.

1. Fry 8-10 pods of finely chopped garlic in two tablespoons of coconut oil in a shallow pan.

4. Add ¼ cup of thick coconut milk once the prawns are cooked and then cook on a medium to high flame for about a minute.

His recipe for Pol Sambal (Coconut Sambal) is quite fiery and not for faint taste buds. While it's common for the Pol Sambal to be cooked with Maldivian fish, many homes and restaurants in Sri Lanka serve an all-vegetarian version sans the dried fish:

1. Finely grate half a coconut.

4. Mix these ingredients together and serve as an accompaniment for the idiyappam and Sri Lankan style curry.