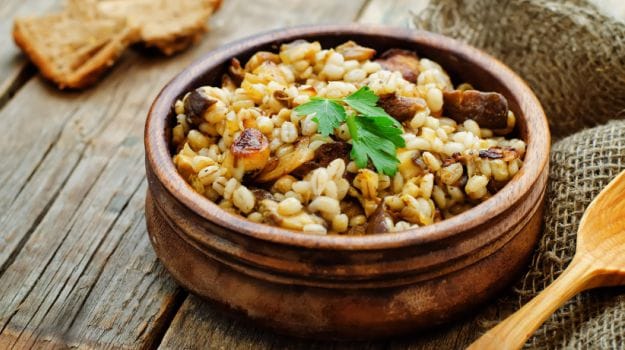 Barley Recipes- Barley is credited with the creation of beer. Yes, if you can't really imagine your weekends without a chilled bottle of beer then you better read up about this humble cereal crop, for had it not been around, the world would have been devoid of many delicious creations. Barley is a type of cereal crop which is popularly known as jau in India. Apart from going into creating soups, stews and salads, it is also used to bake a variety of breads.

Barley is reportedly one of the oldest grains to be ever cultivated on earth, with its first cultivation reporting back to almost 13,000 years ago. There are usually two broad categories under which one can expect to find the crop in the supermarket aisles - hulled and the slightly more refined version known as pearl barley. The hulled version has the husk removed but the bran still intact whereas pearl barley is completely refined and polished sans the husk and the bran. While the hulled version is nuttier in flavour and more nutritive, pearl barley is super easy to cook.

All in all, with a cup of barley added to your daily diet, be assured to get a sufficient load of fiber, copper and selenium. Its high fiber content makes is great for digestion and aids in intestinal protection. Barley, in general is low on glycemic index, which makes it an excellent dietary option for diabetics. It is known to keep a check on cholesterol levels and contribute to a healthy heart.

Barley is easy to cook, the hulled variant usually taking double the time compared to pearl barley, but it is worth the wait. Hulled barley works wonders when used in lieu of rice unlike pearl barley which becomes starchy when cooked; it therefore makes an ideal option for soups, stews, broths or cereals.

If you are one of those who savour variety and are not satisfied by the regularity of ingredients then head to the market and lookout for many other barley products. From barley flour, barley grits to barley flakes - there is so much to choose from and cook with.

Already inspired to cook with this ancient grain? We bet that once you start experimenting, you will keep going back to it.

To begin with, try your hand at our handpicked recipes and feel free to share with us your novel experiments with the humble ingredient.

Cook together barley, button mushrooms and shiitake mushrooms to arrive at this healthy, vegetarian treat.

A mouthwatering vegetarian delicacy, this khichda recipe is nutritious as well as tasty.

Give arborio rice a skip and turn to barley. Savour the nutty flavour of barley infused with heartwarming spices.

Barley takes the place of rice in this risotto made using distinct herbs.

Beautiful, vibrant bell peppers are stuffed with a delightful blend of barley, chickpeas and masalas.

Barley flour is worked into dough and cooked in a delectable mix of chicken broth, veggies and spices.

A delightful winter recipe to try this season.

Barley, red rice and a host of other ingredients come together to create this lip-smacking salad.

Doused with freshly made dressing, this salad is a great mid-day meal for hunger pangs.

Authentic Italian flavours with a healthy spin. A mix of barley, spinach and subtle spices whipped together in a risotto.

Risotto made with a mix of barley, spinach and subtle spices.

Savour the goodness of pearl barley, pomegranate and avocado. Throw in some olives and veggies of your choice with a drizzle of olive oil and lemon juice.

A healthy salad with the goodness of avocado.and other fruits.

Presenting, barley cooked risotto style served along with marinated chicken. This is a great dish to cook for brunch or evening snack.

This rich and earthy dish is perfect for all the health fanatics! Served with marinated chicken thighs.

Barley is spiked with whisky and paired with smoked chicken. The warm salad combined with the crunch of sprouts, cucumber and pomegranate makes it a scrumptious treat.

An easy-to-make, nutritious salad teaming barley with a mix of veggies and subtle spices. Toss up some red and yellow bell pepper, sun-kissed corn, cooked barley, garlic, parsley and a handful of other herbs for a salad so bright and healthy, it'll make you want more.

A healthy and colorful barley salad with fresh herbs and vegetables.

The best of Japanese cuisine that you can now easily prepare at home. Here is a recipe of Arancini balls stuffed with cheese and topped with delicious Japanese curry, wasabi mayo and veggies and barley salsa on the side. An exotic and unique recipe to prepare for a brunch with friends and family.

Japanese curry is one of the most popular dishes of Japan.