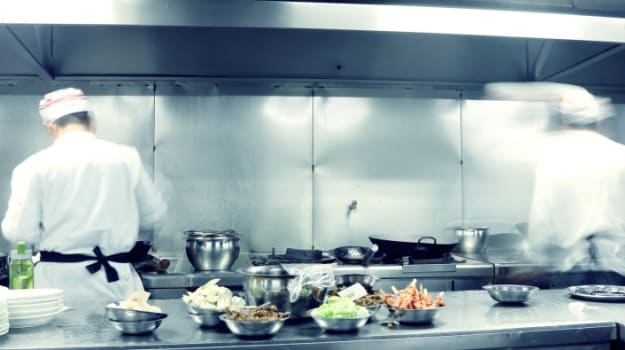 [Scene 1]
An impeccably creaseless cloth falls neatly on the table. The chairs are aligned straight. The menus are spread out neatly, the condiments refilled. The room's a subtle mix of candlelight and bayberry-vanilla. Your table's a delight. The music has obviously been picked out by someone with good taste. Ah, don't you love restaurants. Slow, beautiful and lovely.
[Scene 2]
The pans are falling over in a pool of dirty sink water. The bench is loaded with half cut veggies. The water has been boiling for 15 minutes. There's a lot of prancing, a lot of heat and a whole lot of people in a space that's not big enough to handle it all. There's shouting. Sweat on brows. Disturbed concentration. Welcome to the other side of the restaurant, inside the kitchen. It's furious, messy and dirty.

Not to sound like an old hag, but it's crucial to stay safe while dining out. A study published in WebMD by the researchers from the consumer watchdog group, Center for Science in the Public Interest, have said that people were twice as likely to get food poisoning while dining out as compared to eating in. It can happen at any restaurant, at any time and the reasons can fill up pages. Sometimes, the restaurants see a profit margin by reusing ingredients under a safe limit. Sometimes, the staff isn't as careful - or as bothered - as you would like them to be.

In order to steer clear of getting sick, you need some solid tips under your belt. And the best people to give you this ammo? The people who work at these restaurants of course! They're on the inside, they know about the decisions of the management, they see what happens inside the kitchens and, at large, inside their restaurants. Most importantly, they know the secrets that are unknown to the average customer. Of course, these are wide-scale generalizations and not specific to any restaurant as such. These things may or may not happen at every restaurant, but industry workers swear it's quite rampant.

1. Walk Past the Salad Bar, Please: The toppings, fruits and vegetables like carrots, tofu and chickpeas could be heavily reused for days. At some places, toppings that aren't used one day are stored in a refrigerator and just reused the next day. It's common for restaurants to repurpose ingredients - but it's not always done in the most creative way, and you really don't want three-day old chickpeas on your plate.


2. Hot, Hot Fries:  Normal fries at fast food restaurants get old real quick. If you want a batch of fresh, steaming hot fries, order them with no salt. The guy behind the counter will make a fresh batch and it'll take him three extra minutes tops. Equally important: The servers know the no-salt trick. It's actually better, according to them, to just say you want fresh fries because then they don't have to be extra careful around the fry station and worry about not getting salt on them.


3. Clumsy, Ho: If you drop food at your table that's not covered with linens, do not pick it up and eat it. Most restaurants use the same old rag to wipe tables, transferring all that filth and germs from table to table. Same goes for the tray; restaurant workers hardly have time to clean them - or they're cleaned with that same old dirty cloth.


4. The Cold Truth: The ice machines at most restaurants are almost never cleaned. When they do clean it, after six months or even a year, there's mold and black gooey stuff that comes out of the filters and ice holding bins. This comes from a guy who has worked in the restaurant industry for over 11 years and has seen this first hand. Same goes for the soda machines. In fact, a 12-year old Jasmine Roberts proved that 70 percent of the time, ice from fast food restaurants was dirtier than toilet water in her award winning middle school science project.


5. Word-Play: Usually, all those warm and toasty words on the menu are meaningless. The word 'fresh' is the worst offender - it could just mean 'never frozen' or something that's recently been brought into the restaurant. Some restaurants say their sauces and dips are 'house-made' but they just add some ingredients to store-bought sauces and dressings. Mayonnaise is something that is used a lot, even in the nicer, more upscale restaurants. Honey, mustard, ketchup and other flavours are aggressively added to mayo to make many secret sauces. Other sauces heavily rely on butter.
This one's more obvious but another word to steer clear of is 'of the day' and 'specials' - soup of the day and chef's specials are usually made from yesterday's leftovers and they're highlighted or marked down until they run out of it.  Watch out if the specials contain fish or is some kind of 'gumbo' - you know they're trying to get rid of that stuff - fast.


6. What's Good, My Man? When you seek help from your server while ordering food, keep in mind they aren't allowed to say which menu items aren't all that great. They're trained by the corporates to say everything is good, hearty and dandy. If you do want their real opinion though, always ask "what's your favourite", never "what's good?"


7. I Wouldn't Touch That: That pineapple slice that comes with your cocktail? Don't eat it. Most toppings that come with drinks are left on the bar minus refrigeration for the entire duration of a server's shift, and they're used in the next shift as well. Likewise, never touch the lemon at restaurants. They're cut up right in the morning, left out in the open, handled by way too many people and they're never washed. They're the most unsanitary item you can find at a restaurant.
8. Oh No He Didn't: Got into an argument with your server and worried he might mess with your food? Relax. Nobody really ever messes with your food. The chefs have a real love for their craft and for what they do. At most, the servers will make fun of you with their friends back in the kitchen, have a chuckle and maybe over roast your veggies, but nothing gross happens behind the kitchen doors in that aspect.

9. The Sweet, Sweet Stuff: A lot of sugar can be used in dishes you had no idea could use sugar. It makes the food look shiny and keeps you hooked. It can be used in the pizza dough - or in a pasta to cut the bitterness of tomatoes. Vegetables can also be prepared in a 'glaze' that's full of sugar and butter.

Comments
10. Pass on the Buffet: Most buffets are a breeding ground for bacteria for the simple reason that all that food sits at uneven and inconsistent temperature. A buffet is always almost full of leftover ingredients, food made from starch or food that's heavy in fat. In the past, a study at Virginia University found that some buffets didn't even use real eggs! Instead they used liquid egg substitutes. Yikes.

Source: Hat tip to Reddit threads - and to the fantastic chefs and servers for their inputs.