The Unique Use of Dals in Our Favourite Indian Desserts 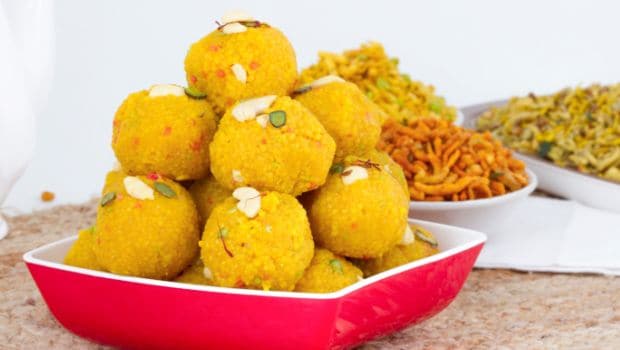 Highlights
The way we use lentils in India is unique. Dals are an intrinsic part of the meal for vegetarians in almost all parts of the country, but they are also one of the most versatile ingredients of the Indian kitchen. As we all know, dals can make for delicious snacks and desserts too and across the country there is a whole genre of dishes - savouries and sweets fashioned out of pulses-that people eat not for sustenance but for recreation!

When you think of Indian desserts, it is difficult to imagine much of mithai without the presence of besan. Chickpea flour is essentially made from a local desi variety of chana, or gram, one of the oldest pulses known to mankind. In fact, the small desi kala chana closely resembles some of the earliest species of gram found at old sites. According to the venerable food historian KT Achaya, chana was found at the Indus Valley sites and the khalva in Yajurveda may refer to it. Chanaka also finds mention in early Buddhist writings.(Also read: 10 Best Besan Recipes)

The small desi chana is hulled to make the Bengal Gram-one of the most widely used pulses in India. The dal got its English name because the English first encountered it in Bengal. Kabuli Chana, bigger and fairer, on the other hand, as its name suggests only came to India much later in the 18th century from an overland route from Kabul. The Bengal gram is used to give us besan. And this is the base for a host of sweets that we find in our midst. Besan Ladoos are common all over northern and central India, the much loved food of many a deity and human.

Achaya suggests that laddoo as a term can be found in the Mahabharata and perhaps the older modak was also a ladoo though now it refers to an entirely different sweet. In any case, this is one of the oldest desserts of India. The same base-besan and ghee can in fact be used in different ways for sweets ranging from besan barfi, set on steel thalis  and then cut into diamonds, or halwa.Mysore Pak, the most popular sweet from Karnataka (which ostensibly does not find a mention in old literature from the region and is most likely a relatively newer creation) is just besan barfi by another name: cooked in sugar and finished with copious amounts of ghee.

(Also read: Mysore Pak - The Three-Ingredient Dessert That Melts in the Mouth)

Because of the copious amounts of ghee they use to make the dal desserts creamier and because of the "heavy" nature of pulses itself, these desserts are more common in winter than in summer. A classic example is the puran poli, from Maharashtra, cooked during the Diwali festivities. Puran is just boiled chana dal sweetened with jaggery (Diwali is harvest time for cane as well), and this is then filled in between layers of a poli or flat bread.

No mention of dal desserts in India can be complete without a look at the jalebiand imarti. Coils of batter are dropped in hot oil and then immersed in sugar syrup. The batter itself varies from region to region. Besan and maida together, fermented by a little sour curd, can give you the crisp jalebis of UP and Delhi. On the other hand, urad dal batter is used to make the jalebi's thicker, wholesome cousin, the imarti.

The desserts obviously belong to the sophisticated Persian tradition and even now, many parts of the former Turkish empire (the Turkish conquered the Persians) have similar desserts in their repertoires. In India, the jalebi seems to have come into existence through trade contacts with the Arab world. We have accounts from Karnataka and Maharashtra mentioning it in as early as the 15th century. Like with many other dishes, it seems to have been refined by the Mughal and later Nawabi cooks to give us the thinnest, crispiest whirls that are looked upon as such a delicacy in UP and Delhi.

Boondi is another dessert that has seen refinement down history. Originally, said to have originated in Rajasthan, the fried chickpea flour dots sweetened with syrup are part of the temple offerings in many parts of northern India. Gradually, boondi began to be fashioned into ladoos, and finally into finer motichoor ladoos. But the acme of its refinement seems to have come about in the old Awadhi culture. Nugdi ke Ladoo at Ram Asrey in Lucknow are still an institution, the ultra fine, orange boondi as refined as the small dot or nuqta of the Urdu script. It's a dying legacy today-one that you need to bite into before it disappears.